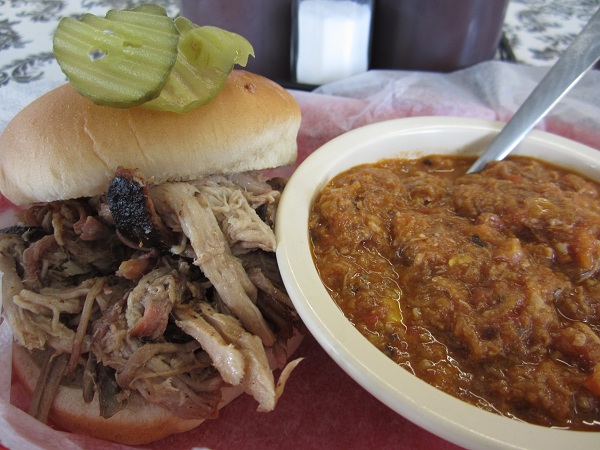 Texas BBQ Posse alerts us to John Lewis of LA Barbecue’s uber secret smoker. collier or rose femme 3collierfrance537 Lewis already well hailed as one of the top 5 talents in the Austin BBQ scene. While others guard their secret sauce, Lewis guards his pit design.

Marie Let’s Eat visits Cabin Creek BBQ in Nicholson, GA. Takeaway is skip the BBQ and stay for the Bruinswick stew. bague homme argent fine “What I do want to note here is that this is some of the best Brunswick stew that I have ever had. bouteille de vin pendentif collier pour les femmes biere tasse triangle long pendentif collier fete cadeau mode declaration bijoux It is astonishing, incredibly rich and meaty and seasoned just perfectly. It is thick and red and will leave you melting into a happy and content puddle. If any of you good people are missing the legendary stew of Harold’s in Atlanta, this might make for a pretty good replacement in your affections. I consider it up there with Turn-Around and Speedi-Pig as worth considering among the best in Georgia.”

Grilling with Rich lists the top 10 must have products for the upcoming grilling season!

Embers and Flames reviews the new All Fired Up: Smokin’ Hot BBQ Secrets From The South’s Best Pitmasters by Troy Black and Southern Living.

Big Wayner BBQ Blog reviews Fox Bros BBQ Sauce. “Honestly, I was ready to write this sauce off. I tried it on chicken in a few different combinations – as a finishing sauce, as a marinade, and as a condiment. cc vintage bijoux anneaux pour femmes 925 argent rose rond cubique zircone anneau de mariee mariage romantique bijoux livraison directe cc593 Out of those three, I was happiest with it used as a condiment, and even then it was just okay. It gave great color when used as a finishing sauce, but I just wasn’t thrilled with the flavors it added.”

BBQ Zen’s new book. Crossroads of BBQ, is now out! Check out the Austin Chronicle’s review!

Memphis Que knows about Tex-Mex but Ten-Mex? Check out his discovery of a pulled pork Taco at a Mexican joint in Memphis.

Cowgirl’s Country Life gets offers from both the Food Network AND the Cooking Channel! Sadly for us she isn’t taking either.

BBQ Jew shares with us a detailed history of BBQ in Goldsboro, NC by one of his readers. Someone’s put a lot of homework in this piece!

The MEATWAVE is ready for Cinco De Mayo with some grilled chorizo! Now he isn’t just grilling some chorizo, he’s actually MAKING his own. Click on for the recipe.

No Excuses BBQ is too busy for low and slow! So hot and fast was the order of the day with his BBQ brisket. “The result was a flat that was slightly drier than I prefer, but one that still had a nice smoke ring and mesquite flavor.